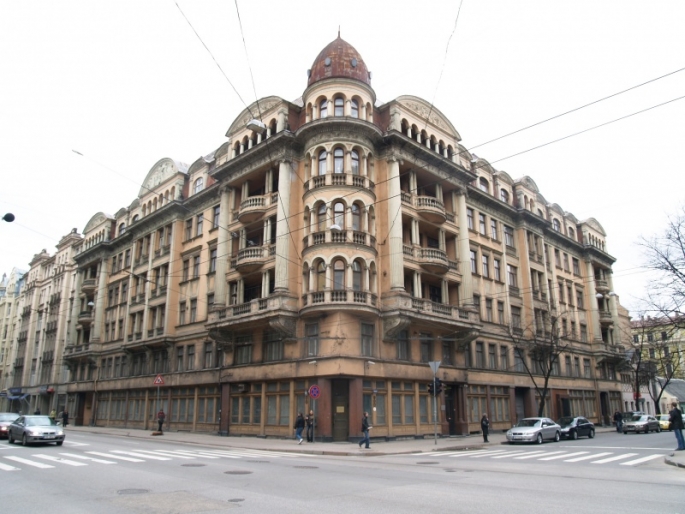 The museum project Take a Walk in the Corner House!

In the spring of 2014, Rīga, the European Capital of Culture, will open the door of the building on the corner of Brīvības and Stabu streets. During the Soviet occupation, it housed the headquarters of the State Security Commission (Cheka) but from 1 May to 19 October 2014 it will present the project “The KGB house. File No. 1914/2014”. As a part of this project the Museum of the Occupation of Latvia is preparing an exhibition about the history of Cheka’s activities and will offer tours of the basement prison cells. Come and “Take a Walk in the Corner House!”

The Soviet regime was supported by the Soviet political secret police, the so-called Cheka. It was founded in December 1917 as “The All-Russian Special Commission” for combating counterrevolution and sabotage. It quickly established a large and oppressive apparatus that searched for and physically eliminated opponents and suspected opponents of the Bolshevik regime. Although the name and structure of this organisation was changed several times, the Russian abbreviation of— Всероссийская чрезвычайная комиссия (Vserossiiskaya Chrezvichainaya Komissiya) or ЧК (Cheka) — became the generic nickname of the whole repressive Soviet system.

On 17 June 1940, the regular Soviet armed forces entered Latvia together with specialised internal military units that established the activities of the Cheka. The Cheka continued actively working in Latvia until 1991. It is responsible for deaths of thousands of Latvian citizens, as well as for physical and mental suffering.

The operation of the Cheka in Latvia was closely associated with the building on the corner of Brīvības and Stabu streets. Already in September 1940, soon after the occupation, work started in order to adapt the building for the needs of the Cheka. The building became a place where Latvian citizens suspected to be in opposition to the occupational regime were held in custody, interrogated and in 1940–41 also executed. The charges were most often based on Article 58 (“Contra-Revolutionary Crimes”) of the 1926 Criminal Code of Soviet Russia.

From June 1940 to June 1941, at least 3355 political criminal proceedings were started. Bodies of many detainees were later found in common graves in Baltezers, Babīte, Dreiliņi, Stopiņi, and in the yard of the Rīga Central Prison. At the end of June 1941, when Notional Socialist Germany attacked the USSR, the Cheka employees hastily organised the transfer of about 3600 persons from Latvia’s prisons to prisons and labour camps deep in the USSR. Less than 1% of them were able to return to Latvia.

All together, the Soviet political persecutions of 1940–41 directly affected around 26,000 Latvian inhabitants.

Persecution of opponents of the Soviet regime continued also after World War II. It was directed against Latvian national partisans and members of anti-Soviet movements. In the post war period, investigations were conducted in the Corner House, but executions were performed in the Rīga Central Prison. After the death of Stalin in 1953, the activities of the Cheka changed – physical torture was often replaced by psychological pressure.

During the following years, when active opposition to the Soviet regime was essentially suppressed, physical repressions were only used in rare cases. However, the Cheka was still controlling society and keeping it in a state of fear.

Due to the incomplete documentation, the activities and methods used by the Cheka in Latvia cannot be studied in full detail. Investigational files and external agent cards are in Latvia, but staff lists and in-service documents are located in Russia, out of the reach of the Latvian government and researchers.