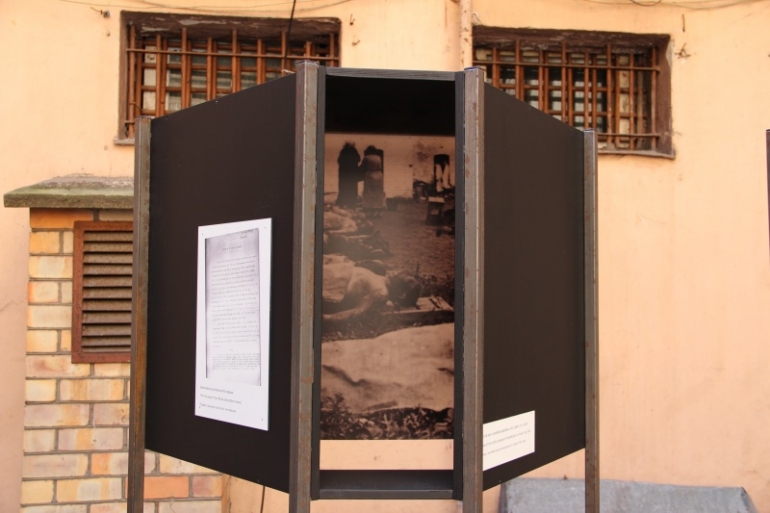 On 7 July in the former KGB headquarters in Riga Brīvības iela 61 the Museum of the Occupation of Latvia opened an exhibition titled ''The Earth will Grieve for us for a Long Time''. The exhibition is dedicated to the 99 victims of the communist terror who were shot by chekists from 27 to 29 June 1941 and then buried in Riga Central Prison.

The last two years of research by Inese Dreimane, historian of the Occupation Museum of Latvia, has lead to the identification of all 99 victims of one of the last acts of the Soviet occupation regime in 1941.

The first Soviet occupation of Latvia (1940/1941) is commonly referred to as the „Year of Terror”. During this year, the Soviet State Security Agency, the Cheka, arrested more than 3745 citizens of Latvia and executed 400. On 14 June 1941, the first mass deportation sent 15 424 persons (0.8% of the population) from Latvia to Siberia. One of the last terror acts of the first Soviet occupation regime occurred from 27 to 29 June 1941, when 99 men, arrested without a trial, were killed in the Rīga Central Prison and buried in its court yard. News that prisoners had been shot in the Rīga Central Prison, became known on 1 July 1941, when the Nazi German army entered Rīga. Even now, family members tell about their grandparents or grandparent parents who went to the Central Prison in search of their relatives.

Newly dug earth was found in two places of the prison yard. Exhumation yielded 98 bodies, and another one was found separately. Of these, 69 were identified very soon, but no further identifications were made or information obtained. The research of Inese Dreimane has yielded biographical information about most of the victims. Among them were 79 ethnic Latvians, 7 Russians, 6 Jews, 4 Germans, 1 Pole and 1 Norwegian. The nationality of one person could not be determined.

The Nazi German occupation regime used information about this Soviet crime for its own anti-Semitic propaganda, but during the second Soviet occupation (1944/1945-1991) commemoration of these victims was not permitted and their graves were neglected. As a result, the killings became a neutral statistic. This exhibition commemorates all of these victims. It will be open till October, 2016.